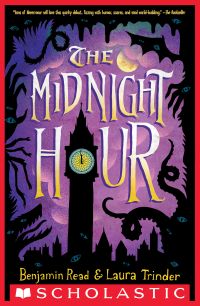 When strange late-night letters start arriving at home, Emily's parents set off to investigate. But when her parents disappear completely and Emily is left home alone to face the weird strangers that begin to appear at her door, she takes all of the clues at her disposal and makes for the place where the letters came from -- the mysterious Night Post. What she'll discover is the secret world of the Midnight Hour -- a Victorian London frozen in time, full of magic and monsters.

Kept safe by an age-old agreement, the Night Folk have been exiled to a parallel world that can only be accessed by a selected few, including the mail carriers of the infamous Night Post that operate between the two worlds. Emily's parents are key players in keeping the Night Folk safe, but when the division of the two worlds is threatened, Emily must search for her parents while navigating this dark and unknown version of London.

Armed only with a packed lunch, her very sleepy pocket hedgehog, and her infamously big argumentative mouth, she must escape bloodthirsty creatures of the night, figure out her own family secrets, and maybe just save the world. This is a frightening and enchanting story, a world built out of creatures from our worst fears who become relatable, fully formed characters unlike any we've seen as these strangers of parallel worlds band together to save the day.